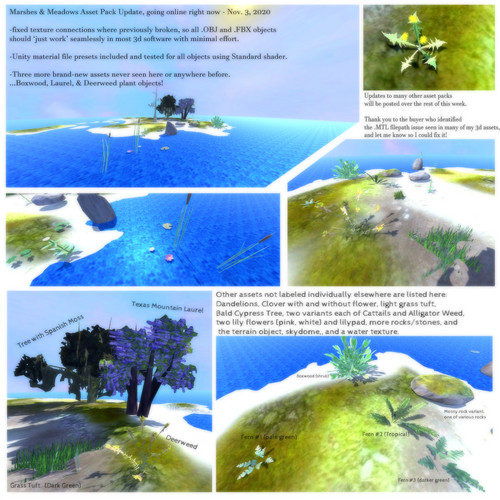 As was pointed out by one buyer on the 'Street Details' page, many of my .MTL files [the material file connected to the .OBJ mesh file format] had absolute, not relative texture filepaths. That meant the textures didn't load in buyers' 3d applications automatically when the model was imported.

That's an obvious annoyance for users - they'd have to stop for a minute to reconnect the disconnected texture maps on those assets they wanted to use.

So for usability reasons, that was clearly not ideal. I am now checking all 3d files one by one across my asset packs and re-exporting (correctly) where needed. Moreover, as I do this, I'm often surprising everyone with added content in each of the packs added in the updates along with the fixed texture references.

Even more cool - I have been making Unity material presets for all textures as well, and loaded all models in Unity using those presets, for demonstration / screenshot purposes.

So tonight, in about the next hour or two, an update should be posted for the Marshes/Meadows pack with more plants, Unity material preset files, and fixed texture issues wherever such fixes were needed.

This is one of a series of similar fixes/updates to go live over the course of this week. (For the next few days, an asset pack will be updated daily until all 3d assets and associated textures, are consistent, working seamlessly and conveniently across a wide range of 3d apps.)

Each update will include an image like what's seen above, with a simple sample 3d scene and one of each object in the asset pack, seen and shown in that scene. [That was kind of a tongue twister!]

I'd like to apologize to all past customers for this widespread issue with my 3d assets, but I promise to resolve the problem, and I'm very thankful to the buyer who took the time to point out the problem.