This package will arrive in autumn 2022 due to some delays. So a bit after the (somewhat delayed) new pyro video-element pack in development. Pyro Pack 2022

It has occurred to me that there might be a use for these types of elements (bubbles, splashes, water flows/falls, gushing / gurgling water, etc)  and so I'm making an asset pack that covers this topic.

Partly I'm doing this because it's a reasonable additional use of the high-speed camera gear I acquired for my in-development pyro pack,  but also I am sure I'll be able to use many of these elements in my own projects.

Because I do VFX work on my own indie videos, I know what is involved in that and what content is useful for these purposes. I'm trying to create a new, extensive VFX water pack here based on the types of elements I imagine myself being able to use... and that I think many of you would find useful as well.

The FX will use high-speed, multiangle recording, in and around a big swimming pool setup, with various additional equipment (hoses, buckets, foaming detergent, coloring, balloons, bluescreen, etc - the intention being to develop a wide range of recorded, compositable elements shot using water, and various dynamic interactions between water and air.

Currently I expect this collection to include between 25 and 40 liquid video elements in quality of 2k or better. Effects may at times involve multiple angles with multiple high speed cameras running, and usually they'll be shot and then masked and digitally processed in such a way that they often can be simply layered into a shot very easily.

This pack is included in most bundle sales like the upcoming Halloween, Thanksgiving, and Christmas sales.

Such bundle deals include about a dozen already-released packs which, together, already include hundreds of 3d assets, hundreds of video VFX elements, and thousands of PBR texture maps.

Plus all the 'preorder material' is included - like a handful of indie games in development, plus new asset packs in the works, like this one. 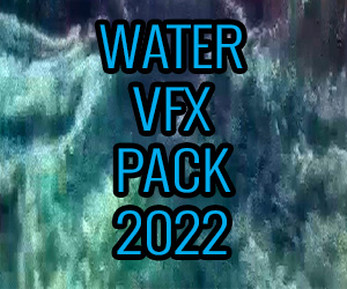