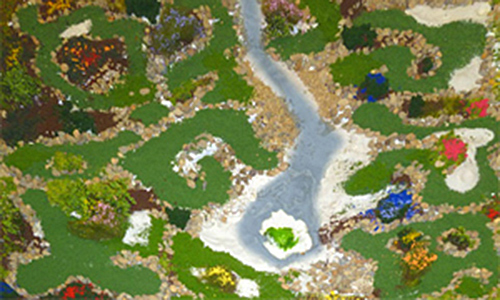 It was first made, foolishly, in a program called 'Gamesalad' that imposed a very arbitrary 10mb limit on HTML5 games. The original version of this game was showcased on VividMinigolf.com, but the Gamesalad Arcade version - the original game - effectively no longer exists.

Well, since 2014 I have rebuilt that game's essential interactions in an entirely different engine for HD with largely the same but far less compressed charming scale miniature art graphics (an old joke is that it's miniature miniature golf) and new courses and holes in the works. The game is solved, essentially, in critical core interaction terms and design... now with only a couple of minor bugs remaining to quash. And I think they can be fixed soon.

I now aim to get the base nine hole game posted here for free very soon.

The base nine hole course version, free from the start, sooner than you'd think, but there is a plan to make an ongoing, expanding set of courses in a paid version. It is possible to pay for the full version even now (before even the free one is posted) and anybody doing so... you have my thanks.

I want to get the following six elaborate new courses done for the initial total batch of seven different nine-hole courses:

-a summer forest course that feels a bit more like a realistic standard styled golf course with emphasis on nature and greenery everywhere. Plus other 'amenities' of a suburban country club sort.

-winter (slope of a snowy mountain, snowy pines, ice as an occasional obstacle with lowered friction, opposite of sand that would slow the ball. This course even has a cabin with a campfire outside it...)

- Hawaiian tropical isle with lush palms, flowering bushes, ferns, water and beaches and a volcano even... )

--- That is the first six planned new course additions. Nine holes each. I hoped to have this ready to go by end of 2021 or early 2022. As is, though, everything's being pushed back a bit.

Because 2021 and early 2022 sales and activity weren't so great, yeah, expect another span of waiting and Miniature Multiverse launching in 2023 instead.

This title though, may be ready to release fairly soon. October 7, 2022 is the current realistic target.

So the game's near ready... exciting? I have figured out a careful way to scratch build as much as possible and cheat cleverly wherever I could on the visuals without compromising the final visual result. Sometimes that means some objects are the wrong scale because that is cheaper and they're *frequently* now photographed as separate elements against flat keyable backing, scaled to match the rest of the scene. Often the materials are cheap stuff that is carefully built into a form that looks a bit more impressive than what it was actually made with. And often I design courses around what I already have material and supply wise, some of that related to papercraft kit showcases or Miniature Multiverse, so all this brings additional (remaining) cost of assembling six new courses to, about $2 per hole or $18 more for each nine hole course. (On average - some cost less, some a bit more)

Beyond that, even, more courses may be added over time in free updates for all existing buyers. I'm also aiming for a Steam release of the full game too, roughly coinciding with the full itch.io release. I considered waiting on Steam due to the fee involved but decided to go for that at the same time as the itch.io and Gamejolt releases.

Plus, the free base demo version could also end up somewhere like Newgrounds, Kongregate, and of course VividMinigolf.com. I have the ability to make it run in a web browser, so... yeah. I might even have an .apk Android app version available at some point down the road.

Planned release date is now October 7, 2022. Soon after the two new VFX packs in development. And those should be available before September 2022.

Any assistance you all can provide could have some impact on this, but it will have more effect on the other titles I'm developing. I am financing this myself as usual, but... if it succeeds I will make sure to add more courses to this game.

$1000+ in sales: American course with focus on various natural regions of the US from the bayous of Louisiana, to the Midwest heartland, to Alaskan wilderness, Yellowstone, California, NY & Texas.

$3500+ in sales: Around the rest of the world - jungles of the Amazon, Australian outback, India, China, Russia, Egypt, and some other surprise spots!

$5000+: Imagined future settings from cyberpunk to solarpunk to various planets! Minigolf on the moon, Mars and more. Of course lasers and robots will be involved.

These may seem like high thresholds players will need to hit but they're really not, especially given how I have already committed over $400 (mostly in mini supplies and materials) and hundreds of hours of work, just getting *close* to the point of the first release!  So if you want more courses, buy this at launch, and help make it a success!

I'll be posting a nice new trailer and a Steam game page during Sept. 2022, about 20 days before it releases. Note that right now it's still possible to preorder for $1.50 (or less) on itch, but when the 20-day countdown to release occurs it'll rise in price to $4.49, at launch the price will be $4.99 - with sales beginning again on Steam and elsewhere a few months later. I recognize that this isn't ideal but Valve has certain rules for this sort of thing - they take 30% cut of every sale there, they don't want a game to launch in other spots days BEFORE releasing on Steam if at all possible, they don't want prices to drop to a threshold anywhere else until that threshold has already been reached on Steam itself, etc. I figure the $4.99 initial price point is my best shot at making this work, even if it's higher than I'd like the initial price to be.

I've done my research. I do have a strategy in place. But it won't work without your decision to help make this game and other later games of mine, thrive.

Get ready to wishlist Vivid Minigolf on Steam soon!

In order to download this game you must purchase it at or above the minimum price of $1.50 USD. You will get access to the following files when they are released: 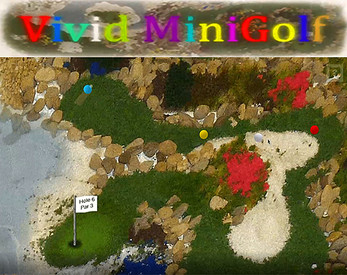